After all the excitement around Jim Murray and Whiskey Advocate picking 1792 Full Proof and George Dickel Bottled in Bond as their whiskies of the year I figured it would be fun to do my own whiskies of the year list. Do I have any meaningful credentials or have I tried enough of this year’s whiskey releases for this list to be authoritative? Of course not! So let’s do this.

Apparently most folks didn’t love the Remus Volstead as much as I did which is great because it means I will have the option to get a 3rd or 4th bottle if needed. As I wrote in my review this a better price on 14 year old MGP than I can find anywhere else and it is masterfully blended compared to the Smooth Ambler and Boone County single barrel releases(which are also fantastic). I am actually drinking it while I type this up.

I really enjoyed this year’s George T Stagg and found that it still had all the flavor I wanted from Stagg and was more approachable at the lower proof. It was also my first BTAC at retail which didn’t hurt!

Despite the high price I’ve been a fan of Joseph Magnus Bourbon and their Murray Hill Club blend for a while. The Cigar Blend tends to be their best release and of the 5 or so batches I’ve tasted 12 stood out from the pack. It’s rich and complex with one of the best finishes I’ve had on a bourbon. As the name implies it also pairs brilliantly with a cigar.

The closest thing I’ve had to Cigar Blend that wasn’t Cigar Blend was Bardstown Bourbon Company’s collaboration with Copper and Kings. It’s 11 year old MGP bourbon finished in American apple brandy casks and is quite delicious.

I don’t drink nearly as much rye as bourbon but I still had a few favorites this year. The Senator was excellent last year so I jumped at the chance to get a bottle of this year’s release and it did not disappoint. It’s spicy and complex without being overwhelming. I also thought this year’s release of Michter’s 10 Year Rye was better than previous releases or at least the barrel I got was. A review is forthcoming.

I didn’t think this year’s MWND was a good as last year’s but it was still delicious. I’ve enjoyed the shift in flavor profile as they’ve moved to using more of their own distillate and I am always a fan of a sweet finish on a rye. Sagamore Spirit had a pretty interesting release of their own port finished MGP rye last year and while I didn’t think it was quite as good as MWND it was still a solid, cheaper and more available alternative. This year they stepped it up with a cognac finish which was even better. I’m looking forward to next year which I believe will be an apple brandy finish.

Rarebird101 wouldn’t put Moonshine Grill’s Cheesy Gold Foil as his top Wild Turkey single barrel of the year but I will and will pick it as my top bourbon barrel pick in general. Maybe it’s because I drank my whole first bottle, probably at least 1 at the bar and have another one at home? Maybe it’s because I didn’t have access to his winner the Single Cask Nation Wild Turkey? We’ll never know.

The runner up was super hard to pick as there were several great barrel picks this year but I am going with the batch 3 of Oak Liquor Cabinet’s Joseph Magnus pick. I am fan of well aged ~100 proof MGP, of Magnus and of the picks at Oak. I think this pick is the best of the 3 and hopefully not the last pick but with Magnus moving to Republic from Victory things look bleak.

These were both distiller barrel selects and thankfully I have a connection in Park City Utah. The rum and cognac finishes do great things for High West’s ryes and their distillery releases are some of their best.

I coincidentally was in Scotland when the Spirit of Speyside Festival took place this year so naturally I went. It was an amazing experience in its own right and on top of that I was able to get a bottle of Glenfiddich’s festival release which was a 15 year old, cask strength bottling fully matured it port pipes. It was right up my scotch alley. One thing I wasn’t able to track down on either of my UK trips this year as a bottle of Wardhead, indie teaspooned Glennfiddich. Thankfully t8ke and the r/scotch panel picked an outstanding cask of Wardhead for the r/scotch pick and closed that gap in my scotch collection.

Whiskey You Can Actually Buy For a Reasonable Price:

The Four Roses Small Batch Select was an awesome release that brought a lot of what I want from Four Roses, higher proof, older, NCF to an accessible affordable offering. I wish we were back in the days were it was easy to get Four Roses picks for $65 but alas we are not and this bottle helps fill that gap.

When MGP released their own label of MGP bourbon with George Remus I was unimpressed and the release of the Remus Repeal batches flew under my radar for a while but not any more. The Repeal Batch 2 was great and one of the better values in MGP bourbon. Batch 3 is even better imo and the same price. 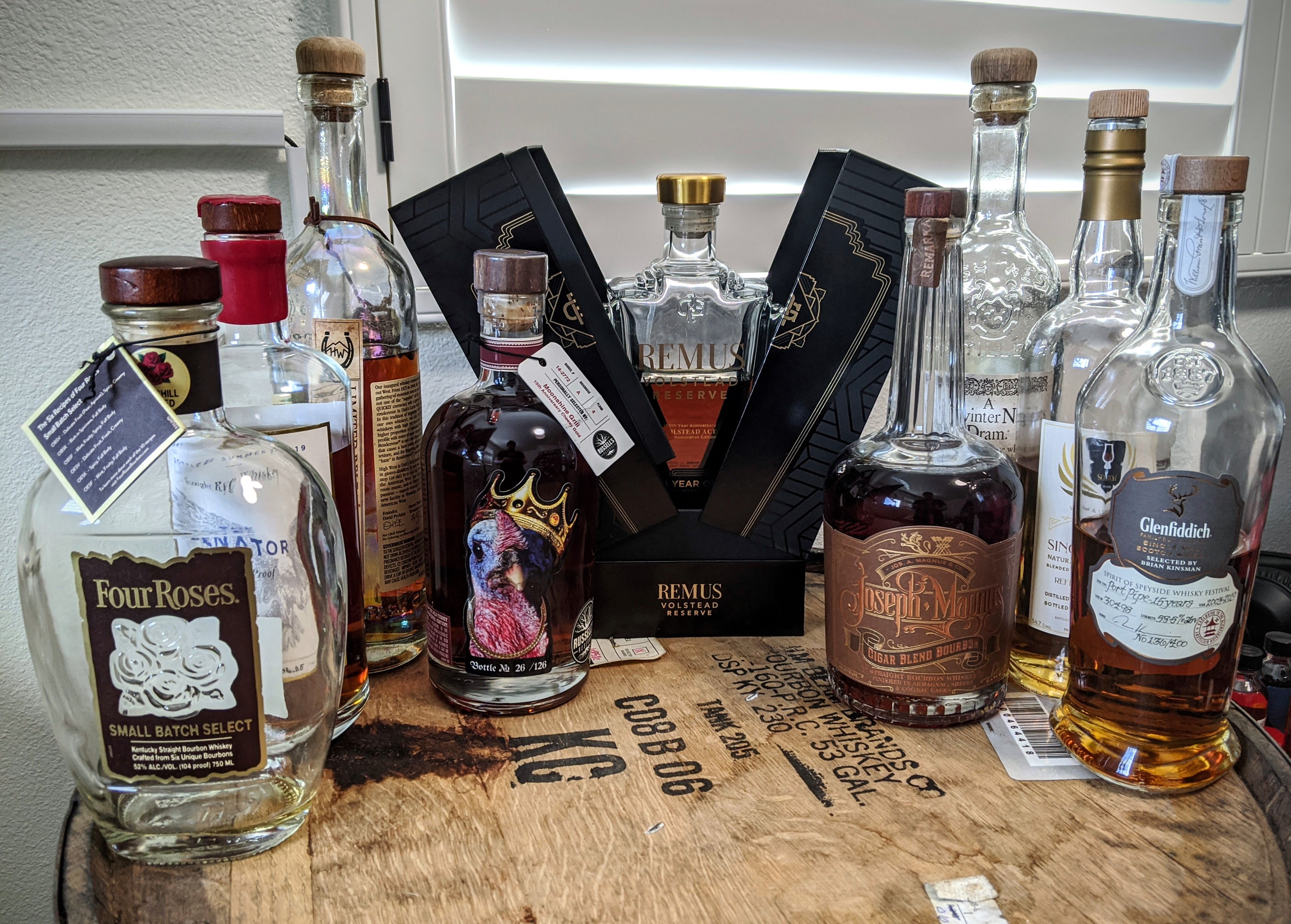 2019 was a great year in bourbon for me. There were a number of great releases especially in private selects and single barrels. Ignore the awards, ignore the internet hype and drink what you like. There is a lot of great bourbon out there that anyone can get even if it isn’t as ‘Instagram-able’ or doesn’t qualify as whiskey porn. Get involved in your local store pick scene and figure out who does great picks as they are one of the best ways to get bourbon that is both unique and delicious without having to hunt, build expensive relationships with store, get lucky or pay significantly above retail.

Be wary of high cost new releases as most of them were misses for me this year. KO Confiscated, BCS 15 year, Cornerstone, Widow Jane The Vaults and Cream of Kentucky were all misses at their price points. Then only one that lived up to its cost was the Remus Volstead Reserve.