Austin Bourbon Hunters and Oak Liquor Cabinet partnered to head out to Garrison Brothers Distillery and do 2 barrel picks. We assembled 10 folks who appreciate Texas bourbon, rallied 4 SOs/DDs and headed out to Hye Texas to drink, sweat, do some manual labor and hopefully bring home something great.

After a little over an hour drive out to the distillery we were greeted with a huge collection of Glencairn glasses and plenty of water. We to checkout a barn full of barrels, one of their rickhouses, the stills and their infamous hotboxes(shipping containers that I forgot to take a photo of). We got to the see barrels that had been selected to make the 2019 Balmorhea but no matter how much we pleaded they wouldn’t let us taste them. 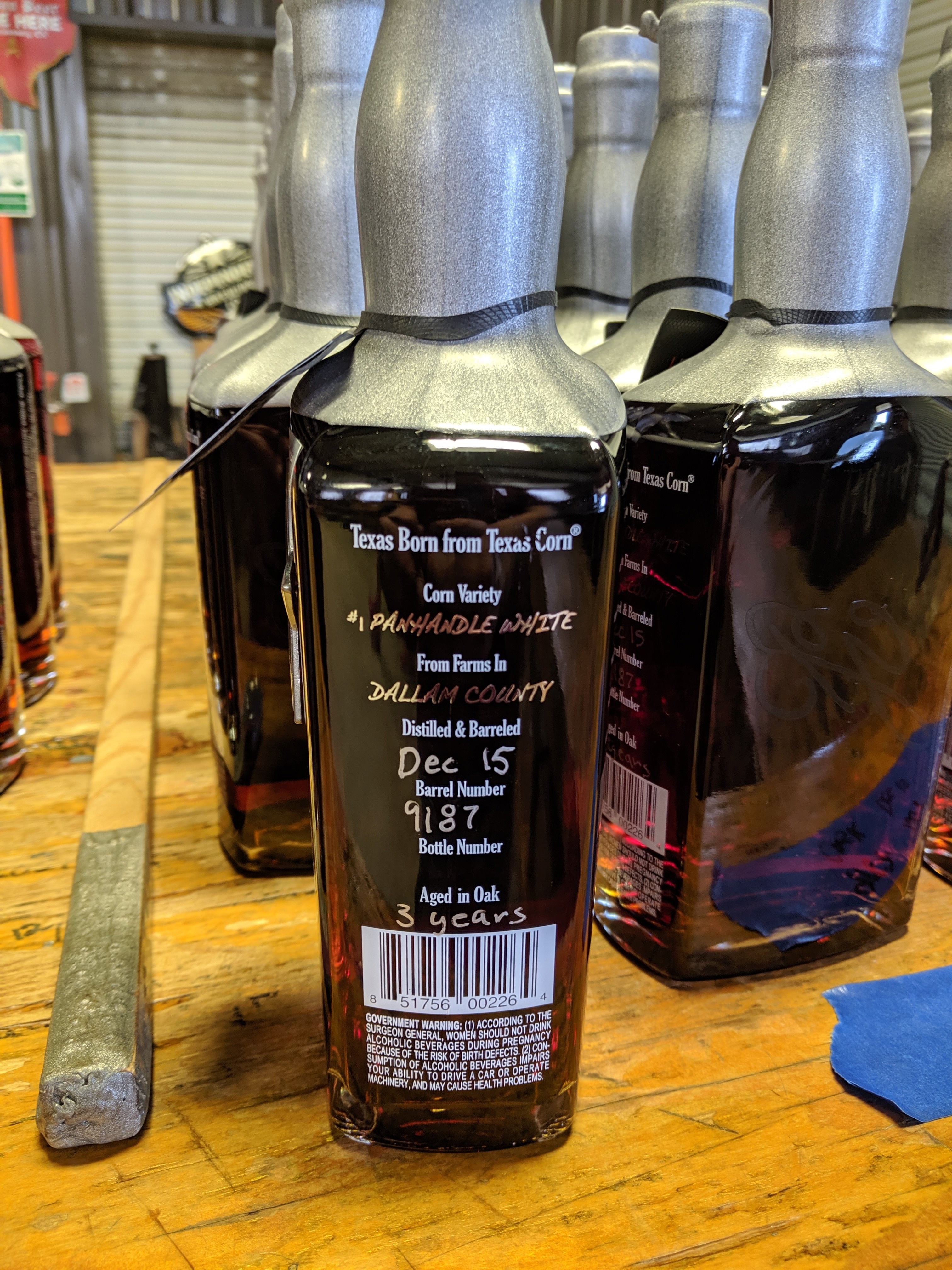 For our first pick we wanted to pick a 15 gallon barrel to bottle at barrel proof. So we got to work drilling barrels and tasting away. The barrels in the barn were between 2.5 and 3.5 years old and many had already been tasted. We didn’t want any sloppy seconds so we started off by tasting virgin 2.5, 3 and 3.5 year old barrels. The group was largely split between the first pick: a bold, brash and very flavorful 2.5 year old barrel and the second: a very smooth, sweet butterscotchy 3.5 year old barrel. I, of course, was a fan of the sweeter barrel especially since Garrison Brothers uses a wheated mashbill. We went ahead and pulled another 3.5 year old and another 2.5 year old barrel.

With such a large group we needed to have a system for picking the barrel so we took a page from the top tier pickers at Moonshine and had everyone pick their top two barrels. Only one barrel was in everyone’s top two which made it an easy call so we picked the 2nd 3.5 year old barrel which wasn’t quite as sweet as the 2nd barrel but had a lot more going on and much thicker mouthfeel. After picking the barrel we checked the proof and it clocked in at a solid 121.8 proof. 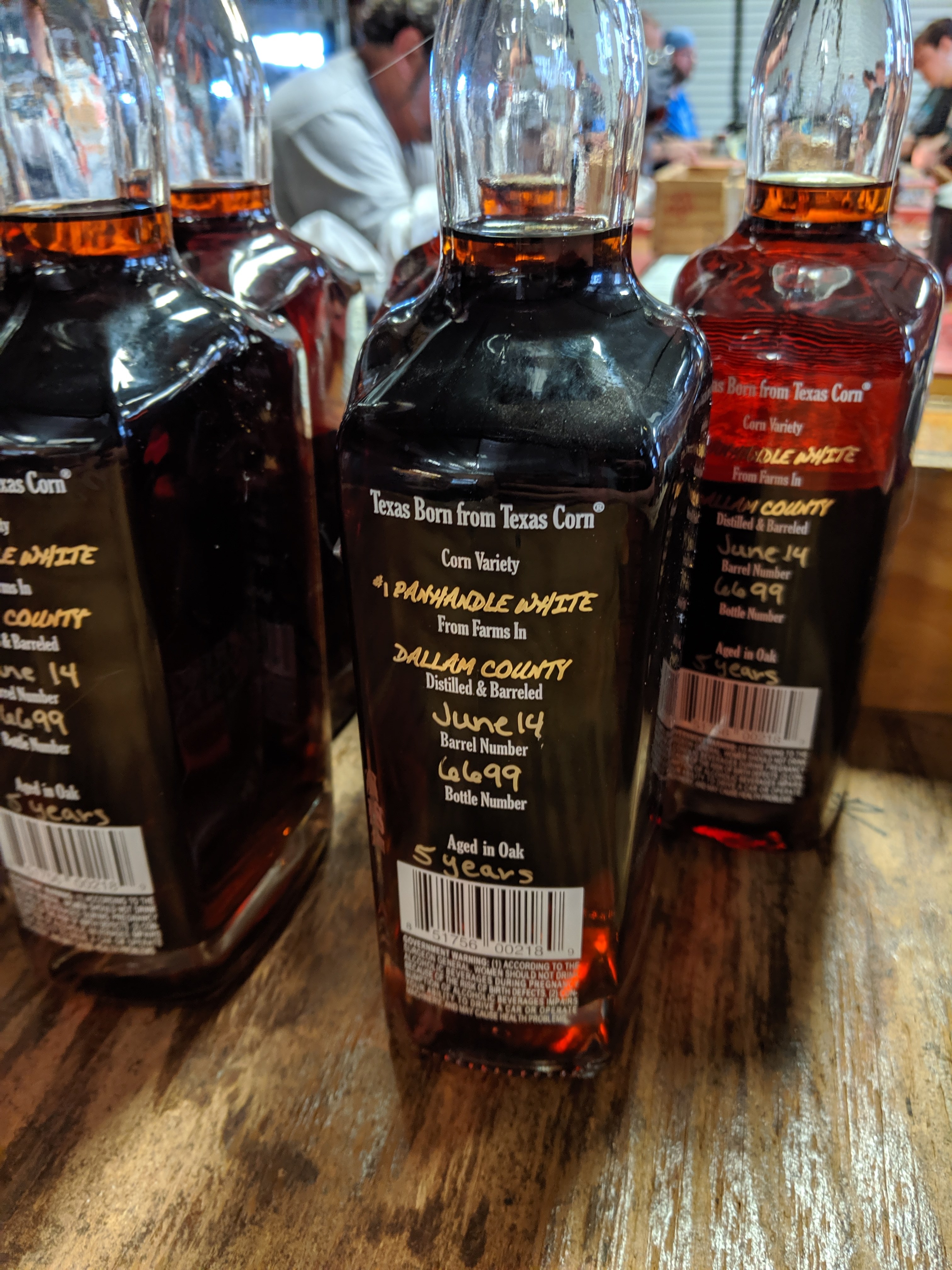 We headed down to a bigger warehouse where they kept the 30 gallon barrels to pick our single barrel which would be proofed down to 94 proof. We only tasted 3 barrels down there and the group unanimously picked the 3rd barrel. It was a 5 year old barrel that was very complex with a very long finish.

After finishing the picks we took a break to eat lunch and drink some water. Garrison Brothers has a chef onsite who smoked up some beef and chicken for a fajita bar. It was nice break before jumping into some manual labor.

While we were eating they brought our 30 gallon barrel up but we got over to the bottling facility in time to see them bring in the the 15 gallon barrel. We got to watch them dump the barrel and then got to work bottling it, but I had time to sneak in a quick selfie. I ran the actual bottling station while some friends corked, labeled and dipped the bottles in wax. The end result was pretty awesome and we all had an awesome time. The bottle should hit the shop in 3-4 weeks and I’ll be sure to post tasting notes then.

We were also joined by another group the Probst Guild out of Pflugerville. They picked a super crazy barrel that only yielded ~2.5 bottles and was basically opaque and black. I did get to taste a little bit and it was very unique and still pretty much pitch black